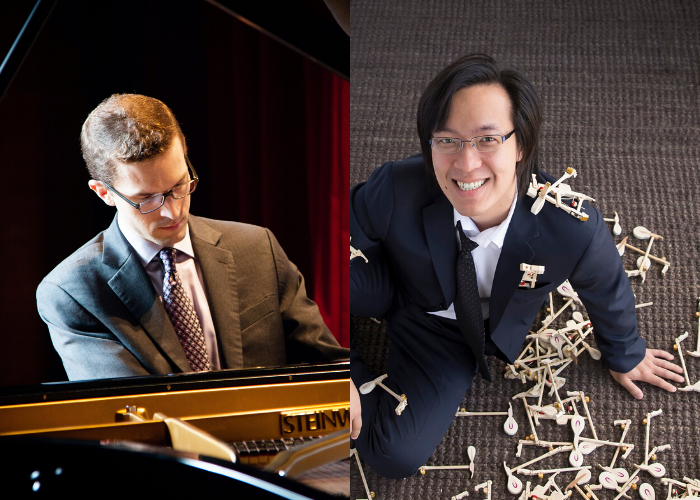 Mitchell & Tsay
"Depending on whom you ask, playing piano four hands is either a merry social event, where two pianists play together in an impromptu manner, or one of the most challenging forms of chamber music to play well and with perfect coordination." - Cecilia Oinas

Jonathan's recordings can be found in Brahms - A Listener's Guide: Unlocking the Masters Series, as well as on Chloé Trevor’s album Immortal and Danse Macabre. A solo CD, Portfolio, was released in 2009, and Jonathan's collaborative album Harmonic Allusions was released in September 2017. Away from the piano bench, Jonathan is the host of the classical music podcast entitled "Between the Barlines" which explores the lives of the various personalities that make up the classical musical landscape in the DFW Metroplex.

Dr. Tsay started his piano studies with Carolyn Savko at the age of five. Under the tutelage of Dr. Carol Leone, Jonathan earned a Bachelors of Music with Honors at the Meadows School of the Arts at Southern Methodist University. Jonathan entered l’Université de Montréal as a Masters of Music student of Marc Durand, and received his doctorate through an accelerated program. Jonathan’s musical background also includes composition studies with Simon Sargon and David Karp, and conducting with Jack Delaney and Paul Phillips.

Evan’s performances have been heard in New York’s Steinway Hall and Weill Recital Hall at Carnegie Hall, in ten countries on four continents, and broadcast on WFMT (Chicago), WFHB (Bloomington, IN), FM 91 (Northwest Ohio), Shanghai Classical FM Radio, and KXII-TV (Sherman, TX). His solo highlights include debuts for Cliburn at the Modern, the prestigious Dame Myra Hess Memorial Concerts (Chicago), and at several major venues in Shanghai. He has played concerti with such ensembles as the Dallas Symphony Orchestra, Fort Worth Symphony Orchestra, Lima Symphony Orchestra, and the Victoria Symphony; collaborated with conductors including Jaap van Zweden, Miguel Harth-Bedoya, Case Scaglione, Darryl One, Crafton Beck, and Richard McKay; and has performed chamber music with members of the Los Angeles Philharmonic and the symphony orchestras of Cleveland, Dallas, and Rio de Janeiro (OSB). Recent engagements include concerti by Mozart, Beethoven, and Tchaikovsky, and a debut on the longstanding Basically Beethoven Festival (Dallas).

Equally in demand as a collaborative pianist, Evan has performed in recital with such major artists as double bassist Gary Karr, flutists Leone Buyse and Jim Walker, clarinetists Corrado Giuffredi and Michael Webster, and hornist Javier Bonet. He has been engaged for several seasons on the Mount Vernon Music and Color of Sound chamber series and served as a staff accompanist for conventions held by the International Society of Bassists and BassEuro; the Myrna Brown Flute Competition and Cliburn Junior International Piano Competition; and the TCU Flute and Double Bass Festivals.

A passionate and articulate advocate for the arts, Evan looks constantly for ways to reach new audiences, and to inspire in others a love for music. The Texas Commission on the Arts has honored Evan as a Texas Touring Roster Artist since 2014, and this season, he returns for a ninth year as a featured artist for Cliburn in the Classroom®, the signature educational outreach program of the Cliburn. Other performance affiliations include Avant Chamber Ballet, Texas Winds Musical Outreach, Fort Worth Opera, and DFW-based Open Classical, whose motto – “Music that’s dressed down, not dumbed down” – summarizes a mission to present classical music in less formal, unconventional spaces.

Evan holds degrees from the Indiana University Jacobs School of Music (BM, MM) and Texas Christian University (DMA), where his principal teachers have included John Owings, Arnaldo Cohen and the late José Feghali, and he has worked with numerous renowned artist-teachers including Dr. Yoheved Kaplinsky, Barry Douglas, and Ann Schein. He has served on the faculty of Tarrant County College and has recently given guest masterclasses at the University of Florida, Santa Fe College, Texas Wesleyan University, Western Kentucky University, and Southwestern University. For more information, please visit www.evanmitchell.net.