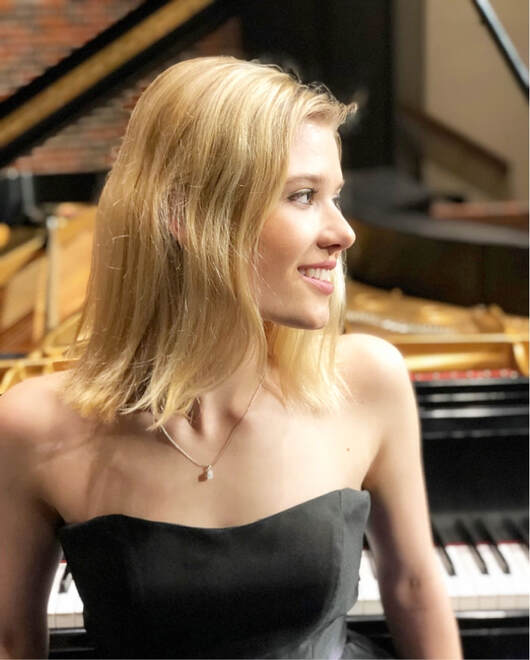 At age twelve, Halle was selected to perform on National Public Radio’s “From the Top”, which highlights America’s talented young musicians. She was the grand prize winner in the McKinney Young Artist Competition and has won prizes in the Weatherford International Piano Competition, Texas State International Piano Festival Concerto Competition, and the Texas Music Teacher’s Association’s student affiliate competitions. As a recipient of the Betty Dickinson Award, Halle has been invited to perform a solo recital at Blanco Performing Arts Center and will receive full tuition to the 2020 Texas State International Piano Festival. In addition, she has recently received multiple Undergraduate Research and Creative Activity grants from Texas Christian University to attend international piano festivals in the United States and Europe. Last summer she was invited to participate in PianoTexas International Academy and Festival. While touring France as a participant of the French Piano Music Tour, she had the opportunity to perform in a musicale at Chateau des Faugs, the ancestral home of composer Vincent D’Indy.

Halle has performed in masterclasses with renowned artists such as Pascal Rogé, Ilana Vered, Misha Dichter, Cecile Licad, Marina Lomazov, Veda Kaplinsky, Bernd Goetzke, and Julian Martin. She is currently pursuing a Piano Performance degree at Texas Christian University as a student of John Owings. She is the recipient of the School of Music’s prestigious Nordan Scholarship, the Lili Kraus and Spitler Scholarships, and the TCU Academic Scholarship.